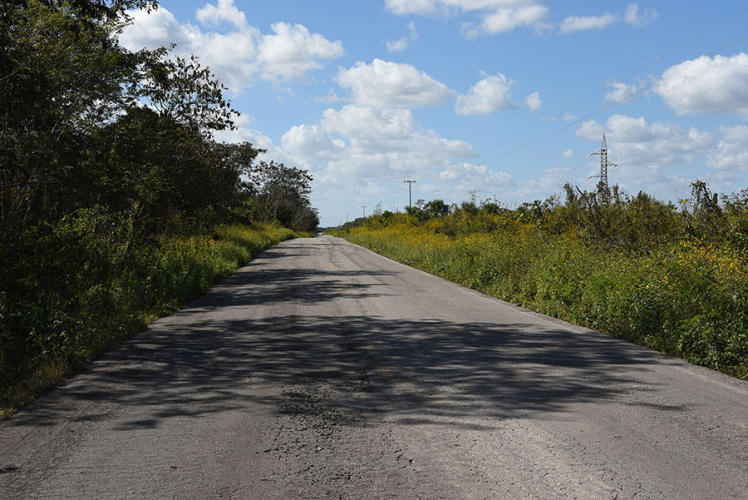 We started late at 8.30 am. after a short breakfast – just some fruit.
There wasn´t too much traffic on the road and soon we pedaled on the road number 180 (carretera libre) destination “Merida”.

It was nice to cycle, few traffic, no hills, just we had to adapt to the heat with that strong humidity. In order to that, we did lots of breaks and took it easy.
After some hours, my wife wasn´t feeling good – but the peanuts, that our host Veronica in Cancun had given us helped her out.

Even if you drink enough, you lose a lot of salt while sweating, and that can get you out of balance, too. So thanks a lot dear Veronica!!
As we rode on, we saw some taxi drivers blocking the entrance to Pemex gas station. They said it was their way to protest against the enormous rise of gas prices. Every day they were blocking the gas station for about one hour.
Anyway we arrived in Kantunilkin without problems. I had a flat tire just 10km´s before arriving but I could solve it by pumping up the tire from time to time. So it wasn´t too bad. It turned out to be a fake anyway- the old patch from a formar puncture had detached due to the heat.
We had some tortillas with chicken at a “Loncheria”, which are small places where you can have small things to eat. Restaurants in these small villages aren´t open at night.

Only in bigger towns you can go to a restaurant at night, but normally in Mexico´s rural areas people have only small things for dinner – more like a snack.
After we went back to our “Posada Los Angeles” – basic but clean – and fell asleep immediately.