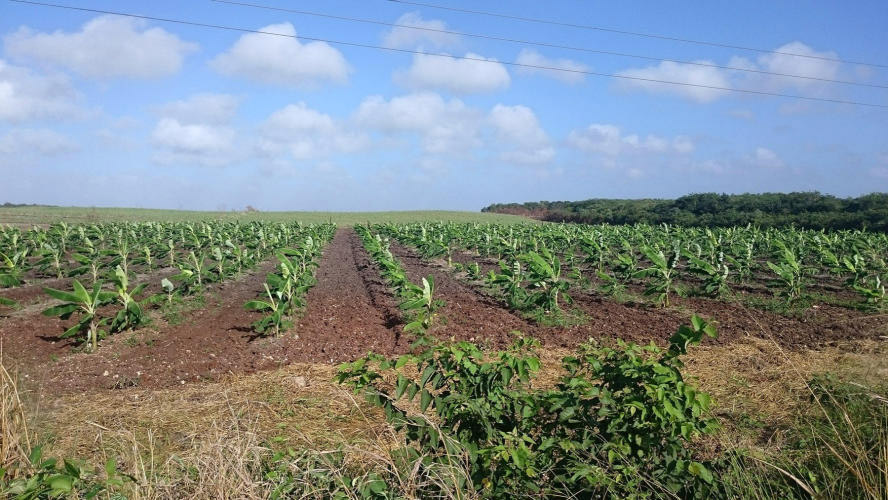 Today I didn´t hear my alarm bell ringing so I woke up at 7 o´clock which is pretty late for me on a cycling day. I shortened the usual morning ceremony and at 7:30 I was on the road.

In the beginning the road seemed more a highway with big shoulders (which I apreciated because there was a lot of traffic). It leads to Chetumal at the Guatemala border. Some guys on racing bike passed and I managed to stick myself behind the car that was supporting them. I think they felt quite irritated and I was going like this (at 26 kms/h) until I took the turn to road 186.

From here all the way to Xpujil the road was hilly, hilly and – hilly. Up and down all the time. Very exhausting. At least there was no wind ahead. Lucky me. Temperature was rising up to 39C° and I had to do a lot of breaks due to the hot sun.
For the first time I had to pass two military check-points. At one of them, a young soldier began to ask me where I was coming from and where I wanted to go. Then he wanted to check my bags. For god´s sake another one came and began to ask me some facts about the tour and the bike. I put the nicest smile on my face and chatted a little while with him – he really was interested. After he just waved me through the toll gate without bothering me. Cool.

Then, about 30 kms before Xpujil an extra-problem occurred: a rear spoke broke and I decided to stop to get it fixed right there on the roadside. For me a world premiere: this was the first time ever a spoke broke while touring with “Bike Friday”. I tried to fix it right there, but I couldn´t manage to. I don´t have a new nipple with me and there was still a little piece of the spoke inside the wheel´s current nipple. I just couldn´t get it out.

Back home in Argentina they say (after they finished swearing like crazy) “es lo que hay” in such a situation. In english approximately “this is all that´s offered- take it or leave it”. I pedaled on with one spoke missing. Good bike friday, it didn´t let me down, although handicapped.
These permanent ups and downs really made me tired today. Anyway – on the last km I was going fast. I only wanted to arrive. My Hotel Calakmul where I had reserved a room in advance was easy to find.
Hunger !!! I got a shower and went to eat. Chicken with rice and beans. What a lovely dinner !!!