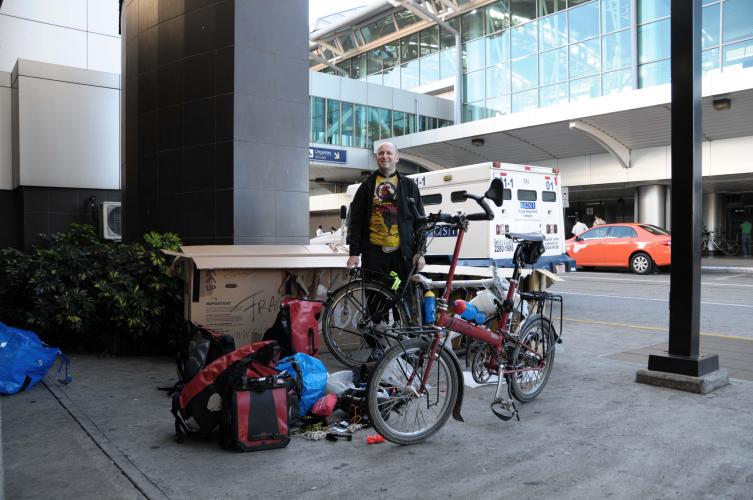 At 6 o’clock we finally arrived at the airport in Alajuela, Costa Rica.It turned out to be such a long flight.Although we knew it would take us ca. 15 hours to get here it seemed endless. We had to get out of the plane in Santo Domigo, where we had a small stop and that took us also 1,5 hours.

But now, after passing the pass control (also an endless queue) we got out and Gerardo began to put the bikes together. There were already some Ticos (the inhabitants of Costa Rica are called like this) watching us and asking about our journey, all in an interested very nice way.

At 9 o’clock we were on our way to our first destination Cartago. As Cartago lies about 1450m high, the road is climbing up and the street is all highway. Huge traffic, and especially the trucks pass so close that you got to be very aware of the traffic situation and drive extrem carefully.
That’s really exhausting after such a long flight,and we were glad to arrive there save.
Cartago is a small city and actually there is not much to see there.

Some nice ruins of a cathetral that was destryed by earthquakes again and again so once they stopped building it over and over again and just left the ruins as they were. Now it’s kind of a central place of the city. We only took a shower and fell asleep that day , for we had been travelling now for more than 26 hours without a break.