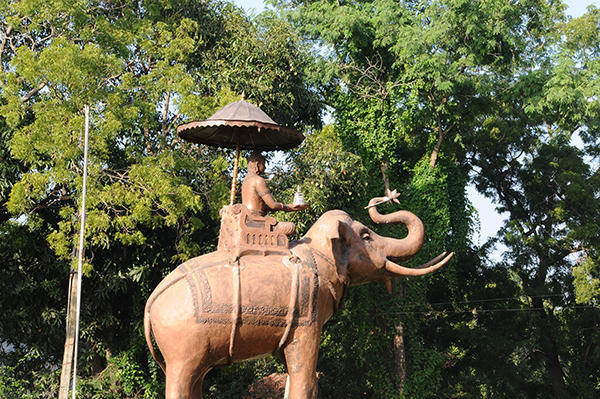 We intended to leave much earlier then we did in the end, because the bye bye turned out to be a long morning chat with the owner of our “Boa Vista” guesthouse. It was already getting hot as we left at 7.30.
After having passed the town the road was getting a lot calmer and we rode along relaxed. The familiar scenery of rice fields, coconut stands and private houses was interrupted by busy, loud and chaotic little towns we passed on the way.

Nothing special – the road seemed to be newly paved, so we took it easy, just strolling along. The highlight was a tuk tuk bakery that stopped for us and we bought some egg/vegetable sandwiches for breakfast.
At two o´clock we arrived in Dumballa, a dirty, loud and chaotic city that makes you feel very happy realizing you are only here for a one day-cave-temple-stop.Our guesthouse “Chamara”” was o.k., reasonable room for a reasonable price. Basic. The owners like to talk with the guests and give a lot of helpful advice.

After a short shower break we set off for the famous cave temples. The guesthouse was very close just 10 minutes by foot. The steps up to the caves were a challenge after the 70km bicycle ride we felt in our legs-they were real steep and seemed endless, about 10 minutes climbing up.

At the top one has a nice view over the area and the cave visit itself is no more exhausting. The caves served as a refugee for a former times king who painted them and put altars and a lot of buddha statues. Some are really huge, very impressing. Nearby there is a 30m high golden buddha statue that we also visited, the Sri Lankans claim to have the biggest buddha in the world with this statue. (The oldest tree in the world, the biggest buddha in the world- many superlatives on this island, plus the best food in the world, haha).

When we returned we really felt hungry and were looking forward to the home made dinner of the guesthouse owner. Surprise, surprise, just when we wanted to eat, there was no more electricity in the whole town-darkness all around us…. So they put some candles in the dining room and on the table, and we had an absolute original candlelight dinner! What a romantic end of the year !!!