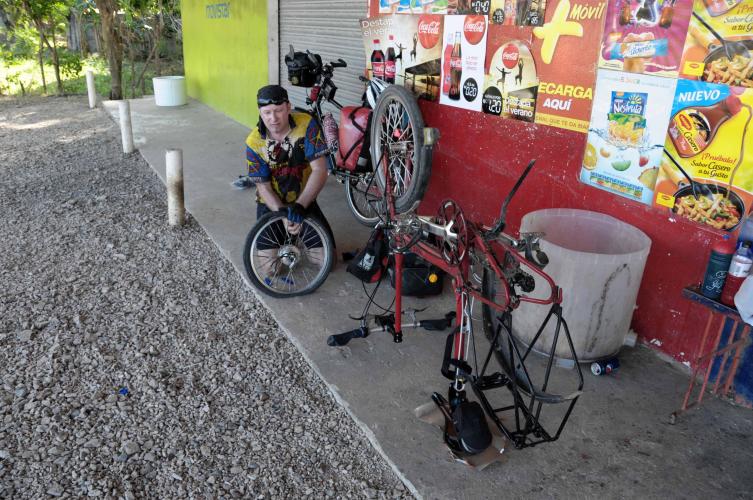 Again the Panamericana. We cycled about 20 km and flat tire number three occured at my wife`s bike. I really don`t know why she is so upset every time, because the one who has to fix it is poor Gerardo.

Fortunately she noticed it, when we were buying some stuff at a supermarket just on the roadside, and I decided to fix it right there because here they offered a very important thing: Shadow!! It didm`t take me so long because I just changed the tube and on we went.

It shouldn`t stay the only exciting „event“ that day. In the early afternoon, about 25km from Nueva Gorgona we had a short break to buy water, and the supermarket was on the other side of the road.

As we wanted to get back on the road again there suddenly appeared one of these monster trucks and this one wanted to make a U-turn, too. The driver simply ignored us and almost hit my wife. As I was shouting at him he looked out of his open window and showed us with a geste of his hand that we better get out of his way, because he would not show respect for some stupid little bikes. Asshole I shouted at him (in spanish of course, it`s „hijo de puta“) and as I watched him making his U-turn, there came another monster truck at high speed.just when the asshole stood in an 90° angle to the direction of this two-way road (called Panamericana!!) the other monster truck crashed into it.
Immediately there were a lot of people and the scene was chaotic. Suddenly some folks shouted at us that all this was our fault, because we wanted to cross the road. I know these countries, and I know if you are a foreigner here and involved in an accident – no matter if you have something to do with it or not – you have no rights.

Could be, that the trucks have only little or no insurances and it`s good to find a „gringo“ who can be blaimed for everything – No thank you. I told my wife to hurry away from the accident and we went as fast as we could away from there. Nobody followed us and so I guess we were lucky. As we reached Nueva Gorgona it was difficult to find a room.

We finally found one in a run down hotel that saw better days for sure. The owner was nice, but the place was more or less under construction (what was really necessary). We walked down the street to find something to eat and suddenly again: police everywhere.

My wife already thought that it had something to do with the accident but they only had robbed the local supermarket some minutes ago. Today we really had such a good timing, always near the catostrophy, but never in it !!