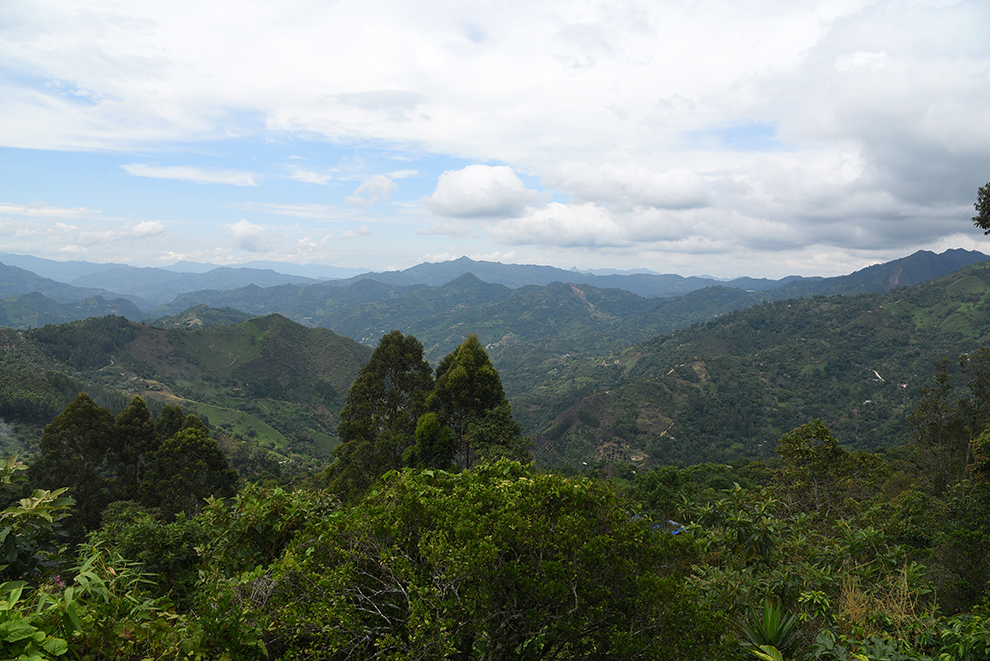 Today at 5:30 I already was awake. I felt so ecxited – my first day on the roads of Colombia. I couldn’t sleep anymore. I was ready to start.

I loaded the panniers on my bike, had a coca tea and did the check out . When I started pedaling it was about 7:20am.

Getting out of Bogota was not too bad in the beginning. I was using google map – pedestrian mode – but then it always took me to wrong directions somehow. Finally I was fed up and I changed to Mapsme which was the better choice.

It took me about 24km to get out of town. Bogota really is big….. I passed through areas you don’t want to be when it’s dark…

I cycled a secondary road (Number 15) and then took the main road 50 to Medellin. From there on the road started to climb really hard. It was even more challenging as it was my first day of cycling and my body still had to adapt to the high altitude.

I took it very easy and did a lot of breaks.

It was amazing how many cyclists were there on the roads of Colombia. I never expected Colombia to be such a biking nation! Nice!

I kept on climbing and about 12 o’clock I reached the top called Alto dell Vino at 2840 m over see level.

An old man came up to me and I chatted a little bit with him. He told me he was keepig fit like this and that last year he even did the Pre-Tour the France. Incredible!

Then another guy called Fernando showed up and joined our conversation. Fernando made me change my plans….. Originally I had planned to do the downhill just for about 15kms where there is a small village called San Francisco.  As Fernando was from Villeta he convinced me to go there instead of San Francisco. Still 53 kms to go but about 30kms just downhill. After that some few small hills and you are already there. Easy.

He was on his way back home and also going there. So we started to pedal together to Villeta.

The downhill was great, but the few small hills after were, too. I told Fernando to ride up in his own rhythm and wait for me at the top but he didn’t want to. He said “You don’t do that. You don’t leave nobody behind”. So he kept on pedaling my slow pace with his fast racing bike. Very nice.

The last 2 hills then really were killing me. I was just finished. Going real slow and Fernando still trying to motivate me. That was kind of⁷ cool,  but I already got cramps in my legs and I needed to walk for some meters. Fernando got off his bike and walked with me. He impressed me.

At 4pm we arrived in Villeta and before he left he took me to a hotel from his family. Very nice experience to cycle with him.

I took a shower and washed my clothes. Later on I went downtown and found an Italian restaurant…I ate spagetthi bolognesa with 2 big beers! Wonderful.